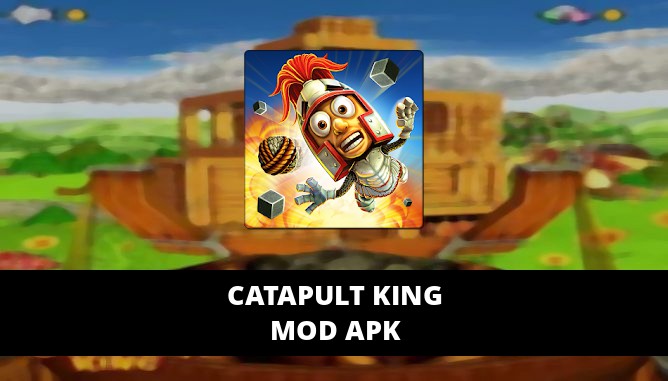 Catapult King Review – 3D Form of Angry Birds Game. I dont know whether the Angry Birds phenomenon has spread to almost the whole world, or does everyone really enjoy playing physics puzzle games using slingshots? If you realize it, the title of my review today is ranked 2 in Top Paid Apps on the Apple Apps Store. Catapult King from Chillingo in collaboration with Wicked Witch developer from Melbourne, Australia will be an alternative game if you really like catapult that has become a trademark of Angry Birds.

Catapult King mod apk will give you the advantage of Unlimited Magic. You can use magic yourself to buy bullets that are more effective as will be explained in the next paragraph.

Catapult King Saving a princess who becomes a captive of a dragon will be your duty. The dragon provides safeguards by installing soldiers you must fight. In the form of a formation similar to pigs in Angry Birds only now replaced with warriors, you have to destroy them with giant catapults and stone balls as bullets.

The game in Catapult King is taken from the perspective of the first person, where your body will not be visible and only the weapons you use are visible. With a model like this, the playing experience will be a little different because you will see from a 3D perspective. The soldiers are on a pile of wood or even can hide behind it, you have to find a gap and fire a catapult towards him. The controls used are very easy, you just simply swipe down to throw bullets from the catapult. Keep in mind, besides swipe down, you can also direct where you will throw the bullet by pointing left and right (in a bullet state ready to throw / while holding swipe down). An arrow in front of you will help you to estimate where the stone ball will fall later. The 3 star system in this game is slightly different and has more variety. Taking the royal style (because of the title Catapult King: D), the 3 stars were replaced with bronze, silver or gold crowns.

To get the golden crown, you have to shoot down all the soldiers with as few bullets as possible. In the crown there will be an additional 3 types of diamonds and each of the diamonds is further divided into 3 achivements that you must achieve to be the best. Confused? For example, in a certain level, you will reach a perfect point if, shooting with 1 bullet (will get a gold crown), get 3 white diamonds if you get as many as 20,000 points, 3 red diamonds if you succeed in making a pile of wood sway within 15 seconds, and 3 blue diamonds if successful about 3 times the target soldier. Yes, I agree with you, its really hard to play perfectly. Besides that you will get magic points every time you complete a level. You can exchange magic points for bullets which are more effective than just ordinary stone balls. With it destroying the enemy will be easier, for example you can buy meteors. The method is the same as ordinary stone, you throw the stone but at the end, other meteors will fall.

Unfortunately, this magic method will actually scorch the bullets (ordinary stones) that you still have and replace them with magic bullets. So as a tip, if you want to use magic, use it if you have a few ordinary bullets and the enemy still hasnt finished. Catapult King also provides IAP in the form of magic points and unlock all levels. Leveling in the Catapult King itself is totally divided into 64 levels with 4 different worlds. The size of accuracy is a weak point. It is very difficult to guess the falling point of the stone ball to the right place because this game is the first person. Instinct will play a big enough role I feel. Apart from these shortcomings, you can find funny characters with mocking sounds if you fail to complete a level.

Conclusion, Catapult King is a 3D form of a physics puzzle game like Angry Birds with a different storyline. If you have ever played Angry Bird, it is clear that you will get a different playing experience because slingshots look more real like they are in a real world. In addition, the visualization and graphic presentation provided by Wicked Witch deserves a thumbs up. Save the Princess with catapult from the era of king Arthur.

But if you already feel difficulty, then you should buy or just change all of your bullets by using Unlimited Magic from the Catapult King cheats. For example, you can buy Mystic vortex continuously until all buildings are destroyed.