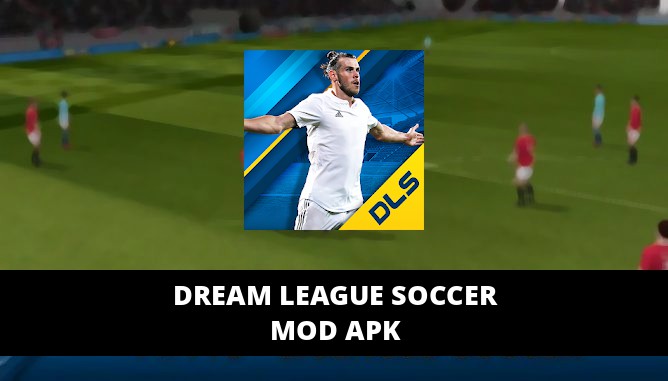 First Touch Games, one of the independent developers of mobile games and centered on football sports-themed game franchises, released Dream League Soccer as one of its flagship franchises. Dream League Soccer is a soccer simulation game that introduces us to how to become a manager and build a team. From small teams and playing in the lowest caste, to star-studded teams and playing in the top castes of a league. Besides being a manager, we will also play the game as a whole team member in the match. The trip is certainly not something easy, various challenges must also be faced.

Using Dream League Soccer mod apk features unlimited coins to your accounts. You can use them to build your facility and get new better players.

This game does not provide difficulty level features, but will be based on our ability to work the team. As well as the higher competition that is followed, the more difficult the opponents face. What are the features it presents?

The interface is the initial display presented as a Home for this game. There are several main menus that we can choose from, including:

On the top left there is an Option button, to change various settings in the game such as the camera, commentator, sound, control, etc. Furthermore, on the right side of the Option, there are 2 Share buttons, to share what happens in the game such as video replays, via FB and Twitter.

In the upper right hand corner, is a Coin which will be very useful for building teams and claiming various rewards in the game. In the bottom corner, there is a display of running text containing brief information about the teams situation.

Dream League Soccer requires players to learn to manage all the needs needed by your team to wade through all the competitions that are followed. Various objectives (Objectives) that must be achieved in one season have also been determined by the management team. Players job is to make his team the best in various competitions.

Determine the teams identity by making changes starting from the Logo, Costume Color, until the Team Name in accordance with the identity that the Player wants. All can be done in the Customize Team menu. Another uniqueness in this feature is the Player can import costumes that are provided with PNG format. By including the links available on various Dream League Soccer costume provider sites on the Internet, the Player only needs to enter the URL of the image into the column provided in the Edit Kit, to be processed until finally it becomes an additional costume that can be worn in the Game.

Dream League Soccer 2019 mod provides unlimited coins. You can control the transfer and get a player in without hassle.

In addition, if you still feel unsatisfied with what you have gained during various matches, the Player can also do Training if you feel that you are still unfamiliar with the game system in this game, and practice to be even better in the match. The training menus include: Free Training, Free Kick, Corner, and Penalty Kick.

To face stronger opponents, of course, the Player must make his team stronger. In this case, Transfer Market will play an important role for a more competitive squad. Players can buy their dream players through the transfer market by utilizing existing coins, or sell old players to get additional funds. For players with prices under 1000 coins, it may be enough for lower level competitions. But the higher the caste of a League, of course the players needed must also be more powerful than before.

Player can adjust the search system according to several available criteria. Star players like Cristiano Ronaldo, Lionel Messi, Neymar are expensive players. If the Player wants to realize the dream squad by containing them as its flagship players, the Player may have to fight extra hard to get coins to buy them to enter the squad. They just want to play at the highest level of play. Of course the Player must be able to achieve this if you want to recruit first-rate star players like them. In addition, all the star players in Dream League Soccer have adopted the FIFPro standard. Which means that the statistics it has will be identical to its original capabilities in the real world.

In addition, here is the uniqueness of Dream League Soccer. Player cannot pass to higher division if other elements cannot be fulfilled. Although the Player managed to become a champion or enter the ranks of teams that will qualify for the upper division, if the stadium that is used does not qualify. Therefore it is required to upgrade their stadium in accordance with the standard capacity intended for teams that will enter in the league higher Division. For example to enter Division 3, the Player must have a Stadium with a minimum capacity of 15,000 people. Therefore, the Player needs to work hard to win every game in order to get a bonus to upgrade his stadium.

This feature does not even exist in big games such as FIFA or PES both consoles and mobile. Dream League Soccer gives players the freedom to manage their own stadium. By applying various variations and combinations of shapes to the corners of the stands in accordance with the wishes of the Player in building his ideal stadium, also enlarge the income bonuses obtained later. Great is not it?

To upgrade the stadium, or buy the dream player, coins are needed. Micro Transactions in this case play a role if the Player wants to get excess coins through paying with “real” money. If not, by fulfilling the goals of the team, the Player will still be able to get coins through claims for what they have achieved in objective for 1 season and when winning many matches. The amount is not large, but the magnitude of the challenges given to get it, is an interesting chalenge to play.

In addition, when you have won a match, the Player can also get more bonuses by watching 30 seconds of video ads for a bonus of 30 coins. This is certainly a pretty decent amount especially for players who do not intend to pay a dime for this game. Because basically this game is indeed a game that is obtained for free.

Dream League Soccer dinheiro infinito is one of the newest in the market. Expect this triche to get one of the top players that are available.

Dream League Soccer 2019 is a simple breakthrough but rich in exciting features in it. As a novice developer who clearly has different classes with studios such as EA and KONAMI, First Touch Games is able to present games that are basically not lost in the same segment for the Mobile version.

Released in 2016, this game is slowly giving many classy changes to be able to compete in the upper classes with old soccer games every year. Dream League Soccer provides a different experience when we interpret a soccer team. Understand how hard management is in building a team from the lowest point to become a team that is ultimately at its peak.

Dream League Soccer cheats offers coin to you. You can use this coins in many ways, spend some for getting new players.