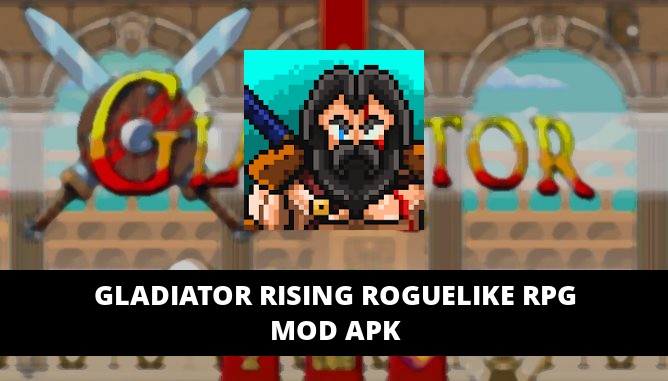 For fans of the game type roguelike, of course already know some of the characteristics of the game. Call it, random dungeon, the need for food, brutal enemies, a high degree of difficulty, permanent death, and much more. Well, there is a game type Roguelike which this time has a different taste made by Happii Gamer Studio, entitled Gladiator Rising.

This retro game presents a heavy adventure that demands that the character is always healthy. Therefore try the Rising Roguelike Gladiator RPG mod apk. You will get Unlimited Gold and Unlimited Gems. Gold you can use to buy items in existing stores.

Narrated in 52 BC, on a land far away, a gladiator (you) was promised freedom from the gladiatorial arena. However, he will only get that freedom if he can fight well. Thats the story of the Rising Gladiator, where the player will not explore a dungeon, but will act as a gladiator in a Roman gladiators cage, where he must fight against a series of gladiators and try to finish them off before they are killed in the brutal battle.

At first, players will be presented with a menu to create their characters, complete with several kinds of customizations. Starting from the skin color, beard, hair, hair color, and eye color. The name of the gladiator can also be customized freely, whether you want to have the name Killamaster or Cownose, which is important not more than 10 letters. After the customization is complete, the player can choose one of three available classes, namely Rogue, Warrior, and Mage.

Rogue class as usual will make players move quickly like a ninja and can avoid the opponents attacks easily. The Warrior class is a strong class, where it has a shield and has a scream that can bring down opponents, while Class Mage is a class that can use magic reliably. After selecting a class, players can customize the four stats they have, namely Strength, Agility, Intellect, and Luck. Each level up, players can add value from these stats. Players will also have the opportunity to choose their special abilities.

Players will start the Gladiator Rising game without the slightest item in their inventory, except for one item, Crucifix of Revival, which will give one life to him. Fortunately, players have some money to spend to buy equipment in the shop.

The battle in the Rising Gladiator is done sequentially, where the player must defeat the Gladiators provided one by one. The fight itself is played in a turn-based manner, the player will choose what steps will be taken in turn with the opponent. Each attack and action requires stamina, while there are some actions that require mana. To restore stamina and mana, there is the action of defense and sleep. Players can also use items to do healing and other things, including throwing bombs at opponents. The fight will continue until one runs out of blood and dies, or the player runs away from the fight. Each defeated opponent, players will get a random loot, which may be useful for the next fight.

The challenge of this game for players is to progress to finish off the opponents provided one by one. How far can you fight before you finally lose and put in a grave? Yes, after your Gladiator is killed in battle, the character will be permanently deleted, and the player must repeat from the start, just like any other Roguelike.

Indeed graphically, Gladiator Rising might not be too interesting, because of its simple appearance by using midget 2D characters and minimal animation. Imagine, to attack there is no appropriate animation, only the characters are shaken to the left and right while being moved towards the opponent until then there is a stabbing effect. But, interestingly, the battle arena is filled with viewers who like to make hilarious comments, like “I cant see anything, because its closed by the games interface.”

Rising Gladiator itself is a free-to-play game that does not require an Internet connection to play, there is no stamina or microtransaction system. There is only a donation system where players can give a certain amount of money to the game developer to get rid of advertisements that are actually not too annoying.

Overall, Rising Gladiator is not a game that is suitable for general gamers. Only those who like the Gladiator theme and like Roguelike, can enjoy this game. For those of you who are still in doubt or even curious about this game, it feels with a fairly small size – only 63MB only – it would not hurt to try Rising Gladiator for a moment. Who knows, instead this title will be your favorite game, right?

If you want to do a Train then you can use the Unlimited Gems that you get from the Gladiator Rising Roguelike RPG cheats. In addition, the benefits of the train will increase the strength of your character in competition.