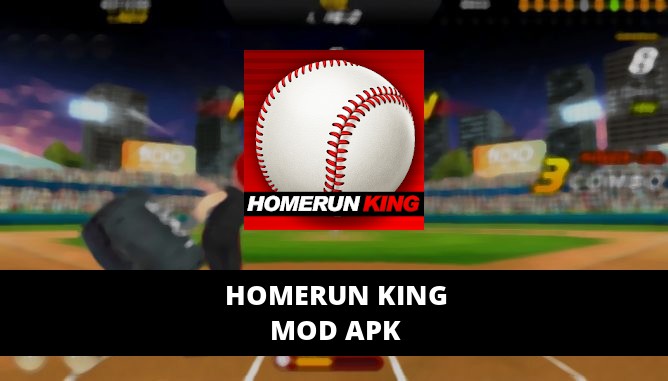 Baseball game is a team-based sport, where one team will take the turn to throw the ball, and the other team will have the chance to hit the ball and collect scores. However, what was presented by Homerun King made by Ligensoft was not a complicated baseball game like that. Homerun King is a mobile game hitting baseball and players are required to try to get as many homerun as possible. There is no team, no throwing balls. Pure, just Homerun.

Homerun King mod apk will help all players who use it. Because it will provide benefits that is Unlimited Runes which can then be exchanged into Unlimited Coins. Not only that, you will also get the Unlock All Characters and Unlock All Bats features so you wont get bored playing.

Basically, Homerun King will be played with very simple. It only takes one touch to hit a baseball thrown at us. However, the timing to hit the baseball is really tight. So, dont be surprised if you will often get a Strike for failing to hit. Get used to yourself to hear the announcement “Sutiiraik!” that, yes. However, if he succeeded in hitting a homerun, the feeling of satisfaction from the audiences screams would be no less outraged.

To help us as players in getting a homerun, Homerun King provides four items that can be used, namely Power, Critical, Anger, and Coin. Well, these items do help, but the truth is it wont really help you to successfully hit a baseball because of the tight timing problem.

There are three modes to play, namely Classic, where the player must hit as many as 20 baseball throws to get the highest score; One Out, which is if the player fails to hit the baseball up to three times (aka three times Strike and gets hit), then immediately game over; and Speed, a mode that gives up to 100 baseball balls, and players must hit as many baseball balls as quickly as possible because the baseball will be thrown non-stop.

Actually whats interesting about this game is its customization feature. Indeed there are only two things that can be customized, namely baseball bat and character. However, there are tons of customization options for baseball bats available. Starting from the normal shape to the strange-looking kind of ancient baton sticks, hammers, dinosaur bones, guitars, axes, sharks to lighstaber everything.

Besides customization for baseball bats, the characters that represent players can also be replaced. There are many kinds of characters, each of which has a unique name and appearance such as Chandra, Yuna, Diego, Haruna, Siti, and other international names. The ugly, the character is really fixed, can not be further customized like changing costumes or hairstyles.

Unfortunately, as a free-to-play game, all of these customizations must be purchased using real money, cannot be purchased using only in-game currency. But, dont worry, because there is a feature such as a lucky box that can be used for 300 disposable coins. If you use this lucky box, then the player will have the opportunity to get a variety of random customizations. In other words, all unlockables in this game must use Gacha.

Due to getting random customizations, the characters obtained are also random via this lucky box. Fortunately, if we get a duplicate item, the object will be leveled up, so it is not worth spending 300 coins on the lucky box.

For those who like cute 3D graphics and simple gameplay, Homerun King is fun enough to be played in passing, especially since this game doesnt need an Internet connection, so it can be played anywhere. Just one warning that needs to be mentioned: Be careful not to get stressed because you dont hit yourself when you hit the baseball!

Of course that wont be a problem because you already have Unlimited Money from Homerun King cheats, right? All favorite characters you can immediately upgrade to the maximum limit, as well as bat, upgrade to the highest so that playing becomes easier.