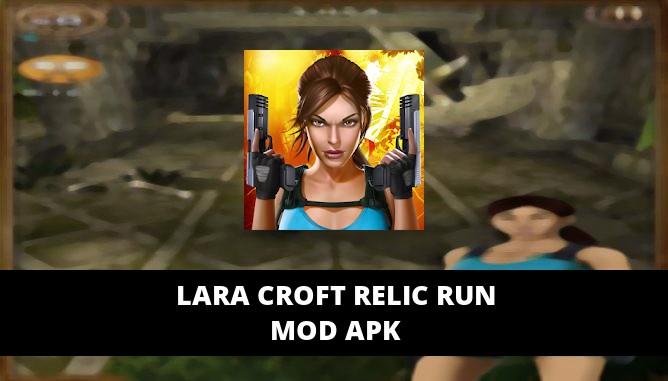 Square Enix finally released a new game from the character Lara Croft in the film Tomb Raider. Using the name Lara Croft: Relic Run, you will play this beauty in an extra-fun and challenging endless runner-themed game. Before discussing further, lets refer to the trailer video released by the developer.

Of course this endless game is followed by the use of currencies. Therefore you can start with Lara Croft Relic Run mod apk. The goal is that you get Unlimited Gems that you can exchange into Unlimited Coins and Unlimited Resurrection Ankh.

Latest changelog:
☑ Fix some bugs that produce the mod not worked

Like endless runner games in general, your action in this game is to avoid obstacles, pick up coins or collect secret objects to advance to the next round. Control is also easy, swipe up to jump, down to sliding or left and right to walk on the wall when the road is really collapsing. Not only that, there is also a parkour action that gets a zoom in with a slow motion style that you can enjoy in certain sessions.

At a glance just read the title, you might already be able to guess the reason why Lara is willing to bother doing a variety of attractions that are quite extreme in this game. In this game you will continue the profession of Lara Croft as a relic hunter who likes to do various dangerous things. For this reason, Lara will undergo a variety of “runner” actions involving reflexes of the players fingers, from riding a motorcycle in a dangerous lane, climbing a cliff, to acrobatics while running avoiding obstacles around the arena.

From the picture above, you will definitely see the location of the weapon that Lara Croft brought, right? Well, these objects are not only for display, you can indeed get enemy shooting scenes from a distance. Although not as dramatic as a shooter game, this shooting action can also give you extra points when it hits the bonus box or can kill enemies quickly.

For the game that will be released on iOS, Android, and Windows Phone, Square Enix and Crystal Dynamics partnered with the developer Simutronics that we previously knew through an endless run game called One Epic Knight. Through their announcement on Tumblr, Square Enix calls Lara Croft: Relic Run with a new term: seamless adventure runner. This means, the various types of actions Lara Croft performed earlier will continue in each playing session. In order to add variety to the game, Simutronics even includes a boss fight mode, one of which you have to deal with T-Rex which was appointed from one of the first Tomb Raider games.

That is why there is a weapon upgrade mode, protection with bullet proof clothes and various other things that can be purchased using Unlimited Gold from Lara Croft Relic Run cheats. For those of you who like to shop with Unlimited Money, then you can buy a variety of weapons and clothing so that Lara looks more attractive.