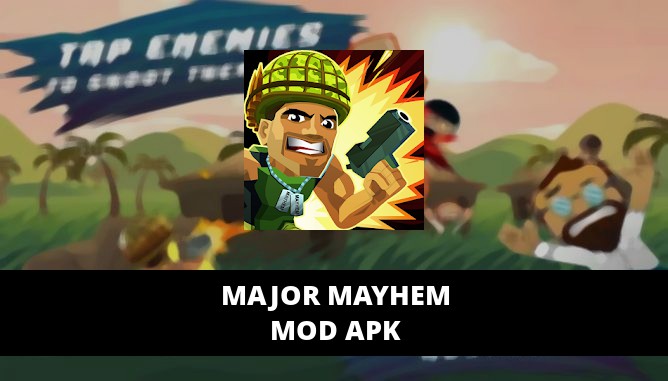 Major Mayhem, the mighty soldier, was summoned by Mr. President. In the briefing, it was stated that he was assigned to go to the Tropics to stop the War Dogs and their Ninja troops. Oh, and they also kidnapped his girlfriend. From the presidents briefing alone, it was seen that the Adult Swim Games game titled Major Mayhem would be absurd, funny, and exciting.

Not wrong, because Major Mayhem is indeed an exciting shooting game for the mobile platform. The player controls the Major in avoiding enemy attacks, while firing at them using firearms. The Major was dropped off at a place of conflict, then he walked to the right until he met a combat area and took cover behind something to shoot at the ninja troops who were ready to kill him.

Major Mayhem mod apk will help you to get unlimited coins. You can use them to upgrade your weapons and armor for your character.

Latest changelog:
☑ Update the mod which not proved helpful before

The control system is very easy, the player only needs to touch the screen to have the Major shoot in that direction. When the player shoots, the Major will be exposed, so that if there is a Shuriken throw from the red ninja to hit him, then he will be “injured.” Once shot, the helmet of the Major will come off. Shot twice, his bulletproof clothes will be destroyed. After that, he also has no protection anymore, and the third shot will kill him.

In addition to firing at an opponent in a position, the Major also sometimes has to shoot at an opponent when he is walking to the next position. To avoid being shot or jump over obstacles while running, players only need to swip up to the Major to jump. It should be noted, that sometimes there are people who need to be saved by the Major. So, be careful in shooting at the ninja, do not let their prisoners also shot.

For customization enthusiasts, Major Mayhem has a lot of customization variations for the Major. Various kinds of helmets or hats, weapons, even the Major himself can be changed shape. Night Vision Googles, Baseball Hats, turn the Major into Detective Bruce, even into Rambro (aka fake Rambo), all of which can be done as long as you have a coin to buy customization items.

For weapons, each weapon will operate differently. Standard pistols will usually shoot one by one, while the machine gun fires at an opponent automatically, the player only needs to touch and hold his touch on the screen, along with other unique weapons. Also, there are the so-called “Supplies,” these items are useful for making it easier for games like Air Strike to destroy the whole screen, Robo Mayhem to change into RoboCop, and so on.

There are several locations of the Majors war, namely Tropics, Metropolis, and Desert, each with a charming and unique environment. The Major also has an animation that does not disappoint, and his enemies in the form of ninja-ninja look cute with an eccentric style in throwing shuriken. Explosions were also shown with excitement, complete with sound effects that are no less amazing and exciting songs.

Major Mayhem deserves to be called a satisfying free-to-play game, because the game doesnt require an Internet connection to be played, there are no annoying advertisements at all, there arent even stamina restrictions that prevent you from playing. Indeed, there are microtransactions to buy coins, but all customization and weapons can be obtained free of charge, which of course must be done through grinding.

If you want a shooting game that can be played quickly, exciting, and under 100MB, then dont look far anymore. Major Mayhem is the game you are looking for, complete with several game modes, including Classic, Timebomb, Arcade, and Survival modes.

Using Major Mayhem cheats will enable you to get unlimited money (coins). You can use coins generators to get as many supplies as you need.