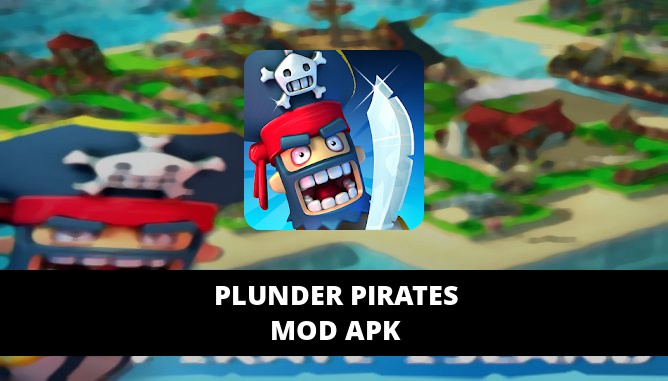 Plunder Pirates is a real time strategy game with a pirate theme. In this game you will lead a herd of pirates to explore the ocean in search of treasure and defeat other groups of pirates. Slightly similar to the game Clash of Clans but, in this game you can explore the ocean and expand your territory by exploring areas that have never been visited. Not only that when exploring we can also look for treasure to increase our wealth bro. If you think you are strong enough, you can attack other pirate domains, to drain their property.

If you want to play more exciting then use Plunder Pirates mod apk because it will provide benefits that is Unlimited Grog, Unlimited Gold, and Unlimited Gems which of course is useful as a defense tool that is buying a Shield without breaking so your city is safe from enemy attacks.

This one game has been seen from the title must be related to pirates, wars between ships and attacking other peoples islands. Aside from graphics and plots that are very superior to COC, squad or troops are also very interesting, ranging from ordinary troops to troops that have deadly combat strength, not to mention, what makes it even more exciting in this game is the event like Halloween and Christmas, where the world of pirates becomes full of pumpkin nuances on Halloween and full of snow and santa at Christmas.

As I explained above, this game almost has gameplay similar to the game Clash of Clans. Where you will build the widest and strongest pirate base in the ocean. Of the several buildings in this game, almost 70% are the same as the game Clash of Clans. But there are also some unique buildings like the Guild Ship, this ship will help you navigate the ocean and of course there are crew members from the guild who will help you during the voyage. At the beginning of the game, you will build several buildings that serve to support your economy and defense.

In this Plunder Pirates game you can also recruit members to help you sail. You will take this crew to explore the ocean in search of productive islands and islands that can be colonized.

You can also beat and hijack the headquarters of other players. And of course your goal in attacking other players pirate bases is to drain your opponents property and expand your power. Here you will put your crew in the water and the crew will swim or paddle to attack the enemy base. Either because I play using a smartphone or indeed the size of a crappy crew, the crew members look like walking grass.

Besides that, with the existence of Plunder Pirates cheats, you can build buildings without hesitation because of the supply of gold, grog and diamond. With gems you no longer need to wait for a long time to finish a building.