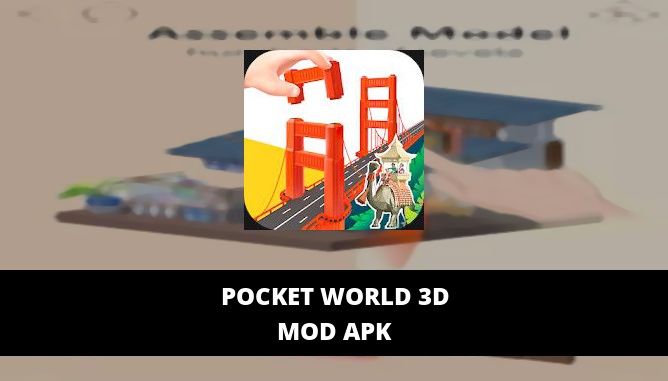 Have you ever played 3D puzzles? In bookstores you can usually find 3D puzzle games with themes of famous buildings, where you are challenged to arrange the Eiffel tower, Notre-Dame, and so on. If you don`t want to spend money to buy various kinds of 3D puzzles, there is a free choice that is 3D puzzles in digital form. That`s what Minimonster presented in their puzzle game, Pocket World 3D.

Pocket World 3D is a fun and relaxing 3D puzzle game to play. All 3D models in this game are based on world famous buildings, so when players start to compose parts of the building models, they will also feel exotic nuances from various parts of the world.

Get unlimited diamonds with using Pocket World 3D mod apk. Convert them into coins as much as you want. Add some themes into your collections.

There are several tools that can help in solving the puzzle, namely a button that shows the blueprint of the 3D model that is being played, so players can guess where the puzzle pieces should go where because it will look like what the puzzle will be after it is finished. In addition, there is also a Light button which is the Hints button. By touching this button, the puzzle pieces will be shown immediately where. Unfortunately, this Hints button is limited, and if you want to use more, players must watch the advertisement video.

As the title suggests, all models played in Pocket World 3D appear in 3D. Players can rotate the 3D model, can even zoom in and observe the beauty of the work up close. With the support of classic songs that accompany the player during the compilation of the puzzle, the game will be very relaxed.

Unfortunately, since Pocket World 3D uses a free-to-play business model, players will be invaded with insistent advertisements. Each time playing a level, the player will be presented with ads first, after completing the puzzle, players will be asked if they want to watch ads to multiply money, there are even puzzles that cannot be played unless the player watches the ad first. Even players must connect to the Internet at the beginning of the game, whether for authorization or what, but later, this puzzle game can be played offline. Of course, players are still required to watch advertisements if they want to play certain puzzles. Microtransactions are also available to remove advertisements and buy premium currency, Diamonds, which can be used to buy coins and Hints.

Actually, Pocket World 3D is really pretty, fun and relaxing to play, but due to the presence of the insistent advertisements, there is no choice but to play this game offline.

You can get unlimited money with using Pocket World 3D cheats. Open many monumental buildings or landmarks and keep them into your collections.