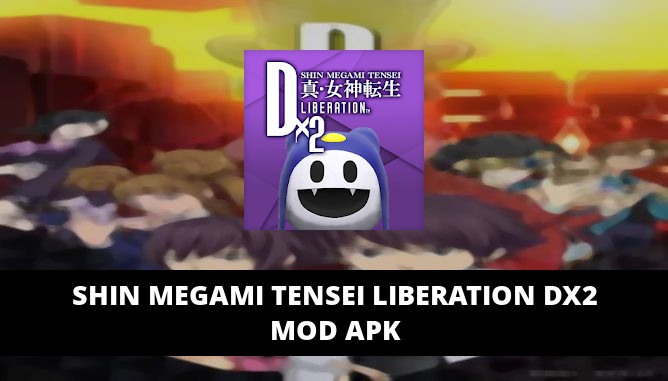 When introduced to the Shin Megami Tensei series, of course gamers will be familiar with RPGs with a high degree of difficulty with stories that take religious themes that may be difficult for casual RPG players to digest. So, this one series is less popular and even more identical with the spin-off, the Persona series.

You are told as an ordinary person who accidentally downloads an application called Demon Downloader (or DX2). After meeting a mysterious figure who calls himself the Einherjar’, the main character joins an organization called “Liberators”.

Your task is to confront the evil group called “Acolytes”. They use Devil Downloaders technology, also known as Dx2. With this technology, you can summon demons through an application on a smartphone.

Tells about the journey of young people in a big battle between factions, the story in Liberation DX2 actually does not feel heavy because it still includes pop elements in the telling. The characters that appear also present with eccentrics and further strengthen the Japanese pop elements ala Shin Megami Tensei.

Gameplay that is presented by Shin Megami Tensei: Liberation DX2 is the core gameplay of Shin Megami Tensei which is simplified and simplified for easier access in portrait screens. Battle in Liberation DX2 uses the Press Turn System which determines the number of actions of the icon that shows a certain command. By attacking enemy weaknesses or critical hits, you will get an additional turn to attack.

Each demon has 10 MP, where the MP will be filled if you do not attack and choose to rest in one turn. If you want to use high level skills like Zandyne or Agidyne, then you have to wait until the MP is filled in the next turn.

Just like the previous series, you can chat with the demons to get the demons help. You can decide whether you will get a demon figure voluntarily or when they ask not to be killed. From here you have to play around with the demon personality by answering questions.

Fortunately, the resulting conversation is not random, so when you meet again with the same demon you can repeat the pattern of answers that you have previously answered to retrieve the demon. The demons that are obtained from Demon Talk are one way to get demons without having to do Gacha.

One unique social feature is that you can help other people in a battle by sending assistance in the form of attacks to the enemies they are facing. When you attack with a move, then you will get additional Fame that can be used after the battle.

The gacha system in Liberation DX2 can be said to be very stingy to players, because to get a high class demon with a 5 star, the rate of a given gacha is only 0.5 percent per demon that you can get. However, the focus of DX2 itself is not from the game but with demon fusion.

Different from some similar games that require the Gacha system to become an OP, fortunately in Dx2 there is a fusion system where you can get the best demons just by combining certain demon combinations. In order to limit players from getting high level demons at the beginning of the game, there are level requirements for being able to fusion certain demons.

You can also transfer various skill options to the demon you want by sacrificing one of the demons that you get either from Gacha or from Demon Talk. So, a combination of skills is also important to be able to survive in Liberation DX2.

There are various supporting items to help your character complete the stage. Therefore, if you use SHIN MEGAMI TENSEI Liberation Dx2 cheats you can buy freely like Monster Dew, Hell Bull or even Aether Crystal.