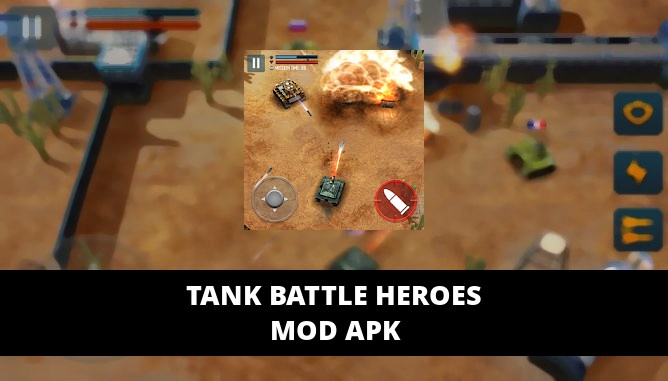 Tank Battle is the game of choice that I play while Im waiting. I am a person who does not like to wait and maybe some of you are like me. So, when I have to wait, the only way to kill that time is to play games on my gadget.

I also played this game with the help of Tank Battle Heroes mod apk. My goal is to get Unlimited Coins, Unlimited Gols and Unlimited Fuel. Why do I need that? Of course, to buy the greatest weapon, and I will explain below.

In Tank Battle you will control a tank that must destroy all the enemies in front and also behind you. You can control the tank in 2 ways, the first is the D-pad + shot button or just a tap. If you choose to use tap, your tank will automatically go to the right and you only have to control the direction of your tank bullets.

What makes this game fun to play is the number of enemies that you can destroy. There are planes or cars that will always come to destroy you. The enemies you destroy here can reach hundreds! I myself did not have time to count the number of these enemies, but after playing there will be information on how many enemies you have destroyed during the game.

If there are a lot of enemies, it would be funny if you only have 1 or 2 types of weapons only. Then the developer gives a total of 7 types of weapons that your tank can use. Some of these weapons can be used from the beginning, but there are also new ones that you can get in the game. The weapons here such as missiles, lasers, nuclear, etc.

Also interesting in Tank Battle is the boss you have to destroy. The boss here will definitely make it more difficult for you. You yourself know, before facing the boss you will be told to finish off the enemy that reaches hundreds, and if you can not guard your HP tank, then it is certain you will lose in boss mode that has a lot of HP. The boss will only be found at level 6 and also multiples if you play on the World Map.

The graphics provided in this game are not yet 3D, but I feel this game has a good presentation. Different backgrounds are also pretty good to be seen. Moreover, the sound of thumping your bullets that destroy enemy aircraft is also fairly fitting in the ear. I feel the graphics in Tank Battle are enough to support you during the game.

Finally, for me Tank Battle is a very exciting game to play if you are waiting. But maybe for casual players, this game is quite difficult because in addition to the enemies that come quite a lot, maybe you will be a little tired when controlling the tank to continuously destroy the enemy without stopping.

As the game progresses, your many enemies will get stronger. Upgrading weapons is the only way you can stay afloat. To do this, you can use Tank Battle Heroes cheats to get Unlimited Money. Then it can be used to upgrade weapons repeatedly.