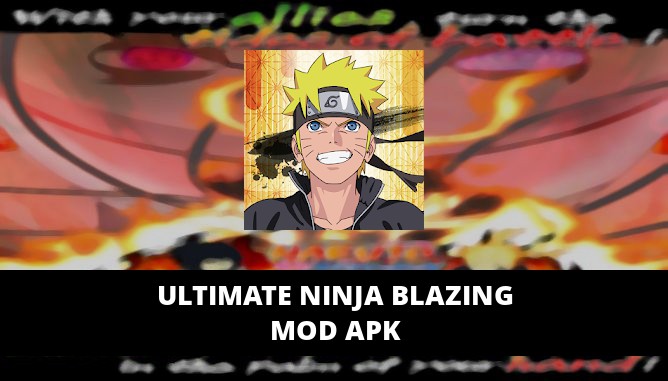 As one of the successful manga in Japan, there is a heavy burden carried by Naruto. Especially if it is related to video game adaptation. Fortunately for many years, I have seen that the official game adaptation for Naruto has never disappointed his fans.

I myself remember how the Naruto Ninja Council so hypnotized me and my sister to scramble to play Game Boy Advance a dozen years ago. Departing from my experience, you could say Naruto is still within the limits of “safe” for matters of video game adaptation.

History of adaptation of Naruto brilliant game continues through his latest game called Naruto Ultimate Ninja Blazing. This Android and iOS game made by Gree and Bandai Namco is not only considered successful in terms of presentation, but also has a fun element that makes it bright enough to be recommended to Naruto anime and manga fans.

The question now, are you ready to leave your old RPG to shift focus to playing Naruto Ultimate Ninja Blazing? Consider the decision after reading the following review.

Adapting famous anime into an Android game is not an easy matter. If it is not done well, the game might disappoint fans. Either because the gameplay that is presented is not good, or because the graphics are too heavy to be played with mobile devices that have less qualified specifications.

Luckily in the case of Naruto Ultimate Ninja Blazing, Gree chose the path of “safe” by presenting gameplay that is not only easy for players to understand, but is also clad in 2D graphics that does not overload the performance of most Android devices.

Unlike the previous Naruto Android game that carries the runner game, this time Gree presents a tactical RPG that is packaged like throwing a carrom pin action. Its just that you blurt out are various characters from the Naruto manga.

To attack, all you have to do is throw your teams character towards the enemy. If your opponents target is close to your team members, your character will produce a powerful combo attack displayed through a cool cutscene.

Not only that, you can also issue special attacks that can be done if your character meter is full. This method is effective enough to be used for missions against the boss, because once the boss loses, other enemies around him will also lose with him.

The core of Naruto Ultimate Ninja Blazing game is grinding by completing a series of missions according to the storyline like in the original anime and manga. Although the game is simple, it doesnt mean Naruto Ultimate Ninja Blazing feels monotonous. Each character has their own characteristics, starting from the differences in the elements of attack, the rarity of the cards, and the special attacks they have.

There are five elements you need to look at in the Naruto Ultimate Ninja Blazing battle. These five elements are Heart, Body, Skill, Bravery, and Wisdom. They function like rock, scissors, paper systems, which will affect how much damage your character produces or receives during combat.

This element system is quite easy to understand. The different special attacks of each character also provide a variety of strategies that make the Naruto Ultimate Ninja Blazing game interesting to follow.

The existence of an element system requires players to actively collect characters and improve their abilities with upgrade items to successfully play at higher mission levels. The single player mode in this game does not feature the whole Naruto story, so you will repeatedly do grinding at the same number of levels with higher difficulty levels.

Besides playing individually, you can also play with other players through online multiplayer mode that takes place in real time. This mode is arguably one of the attractions of Naruto Ultimate Ninja Blazing because it alleviates the burden of the player when grinding in Hard mode, especially if the players partner is a character with a higher level.

Unfortunately for the size of the Android game, Naruto Ultimate Ninja Blazing has a fairly long loading time duration and appears too often in every game screen change. Although not always annoying, but the presence of loading is enough to provide time lag that makes players impatient to start the game immediately.

Another disadvantage is the long duration of stamina regeneration. Worse, some special missions sometimes take a very large amount of stamina to directly consume your stamina inventory for one game.

Fortunately, this special mission is not something that is compulsory, so if you want to play, it is better to focus more on other missions that match the level of the players character.

For this part, Naruto Ultimate Ninja Blazing is arguably included in the category of Android games at an IAP price that is not exactly cheap. The monetization scheme in the game uses two different currencies, namely coins and Ninja Pearl.

Coins are used for the character leveling process, where players need to sacrifice other characters that are not needed as a “sacrifice” so that your character can be promoted. Ninja Pearl is a premium currency that functions to recruit new characters through a gacha system called Summon mode. Gree set a pretty high price for one item of Ninja Pearl.

One chance in Summon mode requires at least five Ninja Pearl items. Recruiting characters via Summon mode is an optional activity, yet players can also get other characters through completing regular missions.

If you want to get rare or even rarer type characters, you can take a shortcut by buying expensive Ninja Pearl bundles. If you are reluctant to buy an IAP, your choice is to continue grinding to save the Ninja Pearl.

Naruto Ultimate Ninja Blazing has a 2D character depiction that is quite attractive, although some of the characters appearance looks repetitive (the effect of many players using Naruto characters). The movements of each character look quite convincing, although sometimes it feels stiff due to the limitations of the animation technique that Gree carries.

This deficiency paid for him with the visual effects of the skills of each character that looks excited. This graphics that requires a constant power supply will no doubt make my device get hotter over time.

As for the sound system itself, I didnt say much because its fairly standard. The sound and music are impressed enough to fill the scene on the screen. Without both of them maybe the game will seem bland. But after listening to it several times, the music in this game is not special, it can even be considered quite repetitive.

In the end I found a Naruto game with an RPG-based free-to-play scheme that was fun and enough to be an entertainment interlude while traveling. The nature of Naruto Ultimate Ninja Blazing game that is thick with grinding elements, might be able to discourage the intentions of some Naruto fans who have fallen in love with the nimble game Naruto Shippuden: Ultimate Ninja Storm.

Although it cant be said to be perfect, at least Naruto Ultimate Ninja Blazing can be a treat for the “official” Android Naruto game which is far better when compared to other imitation Naruto games out there.

But if you wear Ultimate Ninja Blazing cheats it wont feel saturated in playing. You dont need to bother collecting materials because there is already Unlimited Ryo that you can use freely.