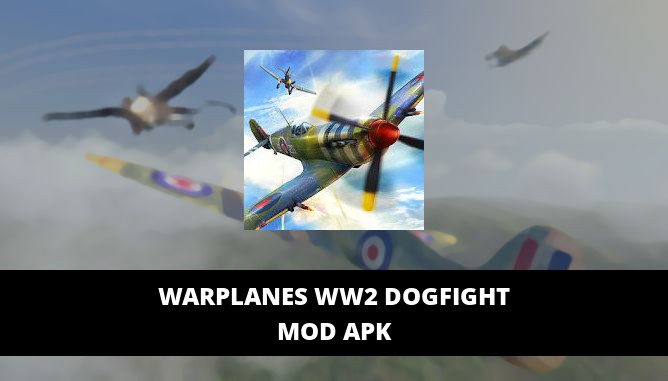 World War II is a global war that lasted from 1939 to 1945. This war involved many countries in the world until finally they formed two large military alliances, namely the Allies and the Axis. In this fierce battle, various kinds of war equipment are used by them, ranging from tanks, ships and fighters.

Warplanes: WW2 Dogfight is a game by Home Net Games where players can fight using a variety of fighter planes. The fun, players can side with three countries, whether it is Great Britain, USSR or Germany.

Also called gyro-style control or motion control, the player controls the aircraft by tilting the smartphone. This method is more accurate, but if you play it in a public place, you will look funny and be a spectacle.

This method of control is more commonly used, and also easier to do. The player only needs to touch the screen, then move the left thumb in the direction you want to direct the plane to that position.

In addition to aircraft control methods, players can also touch a number of icons on the screen such as the boost icon to go faster, the targeting icon to auto aim at enemy aircraft, the bullet icon to fire on enemy aircraft, and the bomb icon if the controlled plane has the ability to throw bombs .

Uniquely Warplanes: WW2 Dogfight is the ability of players to create an aircraft pilot squadron and develop a combat base in detail. So not only flying alone, players can also carry a squadron of combat in their war. This squadron can also be given orders, such as being told to attack other planes or carry out ground attacks, even to target bombing.

The cool thing is, when players are fighting in the sky together with their squadrons, they can immediately switch control to another plane by touching the plane button and selecting the desired plane. So free players want to control fighter planes or bombers as you wish.

Warplanes: WW2 Dogfight has four currencies, namely gold, medal, silver and fuel. Gold acts as a premium currency, and both gold and silver can be used to enhance headquarters with various upgrades such as adding hangars, adding AA Cannons, Workshops, and so on. In addition, players also have a Skill Manager that is useful to ease the burden on the daily expenses of the headquarters. And whatever you do to upgrade the headquarters, will appear on the screen in 3D.

This game also provides more than 30 kinds of authentic historic aircraft, ranging from classic light aircraft to heavy bombers. You name it, Spitfire, Hurricane, Lancaster, Il-2 “Shtrumovik”, La-5FN, Ju-87 “Stuka”, Fw 200 “Condor”, and many more that you can control.

And the most fun, you can also do customizations, upgrades, and repaint the fighter planes to become a fighter plane that is really personal for you.

As one of the free games, Warplanes: WW2 Dogfight, the system uses the aircraft`s fuel system as a flight restriction, but the fuel will come back after some time has passed. In addition to the game that can be played offline, there are also various kinds of microtransactions that are ready to help you improve your troops, such as purchasing Gold, Premium Mode, aircraft bundles, and various boosters.