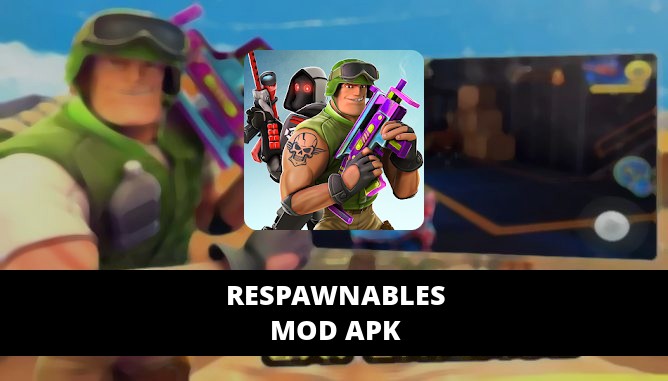 If you like shooting genre games but feel Modern Combat 4 or Shadowgun Deadzone is too hardcore then Respawnables is a game that you might be looking for. Basically Respawanables is similar to Shadowgun Deadzone but is more relaxed, fun and hilarious. What makes this more relaxed is the auto lock so that you will have no trouble aiming at your opponent, you just have to hover over the opponent and the autolock will lock.

Once you start the Respawnables game (which is actually also a bit like Team Fortress 2) you can choose 1 of the 2 available game modes, namely single player and multiplayer. There is no story in the single player because you will fight AI in a folder, just like multiplayer. But whats unique is that you will be given mini-quests such as killing 3 enemies in 2 minutes or surviving in 30 seconds. This mission will give you cash that you can use to buy weapons and equipment that can be used in multiplayer mode.

Respawnables mod apk offers unlimited cash and unlimited gold. You know that weapon is pretty expensive in this game right? This mod will help you to get it.

But of course the core of this game is multiplayer and here you have two choices of game mode, which is free for all (kill all who move J) or team vs where you will be with your team against the enemy team. The controls are quite simple and like most FPS or TPS (third person shooter), where the left Dpad moves the character while the right Dpad to look around. You can shoot and throw grenades with the button at the bottom right. Overall the controls are pretty good and smooth, if you are not comfortable you can change the other types of controls via the option menu.

Respawnables also uses a leveling system that will open access to stronger weapons as you level up. Apart from that Respawnables also uses skill leveling trees like RPGs, here you can choose skills such as adding HP or speeding up reloading time etc. But you have to pay with cash that you get in the game to increase this skill.

As I said above, here you simply bring your crosshair to the enemy and it will automatically lock so that you can shoot immediately, this way we dont need super high accuracy to be able to shoot enemies but still challenging because we have to keep the crosshair near the enemy during they move.

Respawnables is armed with IAP and this is where someone can hate or like this game. Most weapons and equipment offered through the IAP are more powerful and can only be matched by higher-level cash weapons. So IAP users have the advantage of accessing stronger weapons with smaller levels. But it is still fair for non-IAP players because they can still buy cash games even though they have to be grinding longer.

Respawnables uses a graphic that is very simple but still good, the interface is also quite clear and easy to understand so that in terms of presentation this game counts very well. If you are looking for an alternative Shadowgun game but that is more casual and fun then Respawnables is a very fitting game and I easily recommend this game for both first and third person lovers.

The battle core itself feels fun and light, very different from serious games like MC4 or Deadzone. Maybe this is because the characters are unique and also quirky, besides that the characters will also issue hilarious styles when they are shot. The map is designed with a medium size because each game can only accommodate 10 enemies. This way you will quickly meet the enemy, suitable for you who like fast pace shooter. Respawnable cheats not only offers powerful weapons, but also other equipments.