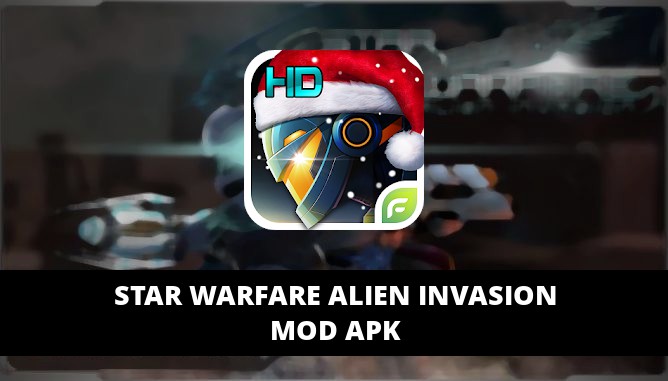 You might have guessed from the title of this game that the story is not far from aliens who are attacking humans, well you are right. In this game you play as prototype 2, a space soldier tasked with eradicating alien attacks. Star Warfare: Alien Invasion is a dual stick shooter type game such as a bros gun, where the left button is for moving characters while the right button is for shooting.

There is almost no story in this game, you will immediately jump into battle to shoot aliens. The game in general is divided into 5 arenas, where each arena will be divided into 5 levels. Level here does not mean the place is new, the place will be the same which is different is the number of enemies that will spawn more. This game uses a wave system where when you have killed the last alien the next alien wave will appear.

Star Warfare Alien Invasion mod apk will help you to get unlimited mithril. You can convert it into gold that leads to many equipments.

Latest changelog:
☑ Improvements for an even better exposure of utilizing the mod

There are two modes in Star Warfare Alien Invasion namely single player and multiplayer, in multiplayer mode you can play with a game center or random friend (maximum 3 people). Uniquely in multiplayer mode you will fight bosses which are not in a single player. At the end of the level you will be given money that you can spend to upgrade weapons and equipment, or at least so ideally, in fact you have to buy bullets which are quite expensive so it will be very difficult to upgrade other parts because bullets are always needed at each level. Unfortunately there are no bullets that can be picked up in the game, the only way is to buy and if your bullets run out in the middle of the level then there is nothing you can do but wait for death, buy bullets then repeat again.

Every alien in this game knows your position so it feels no use to move, just wait a moment and the aliens will come to you. For the upgrade problem there are lots of equipment (around 40) that you can upgrade from a helmet, clothes, weapons. But because this game is enough to emphasize from the side of the IAP (in app purchase) then certain weapons can only be accessed by purchase.

Star Warfare: Alien Invasion is an ordinary shooter game, there are no new elements at all. The graphics are quite smooth but also not too special. According to information from Ifreyr they plan to issue an update with a new map and a few new items, hopefully they will also tweak the balance between IAP and in-game currency so that this game can be enjoyed more.

Star Warfare Alien Invasion cheats will help you get mithril glitch. This is also the newest mithril generator that is available.